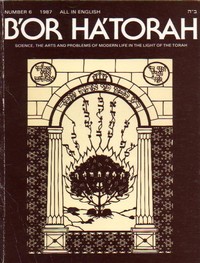 Codes in the Torah

On Acknowledging the Creator in Scientific Literature

Ancient Synagogues and the Temple

On Ideas of Physics and Kabbala

What Does the Torah Mean?

The Role of Women in Bringing the Redemption

A Set of Dishes

Aryeh Gotfryd was born and raised in Toronto, Canada, where he still lives. His parents came there from Poland, after surviving the Holocaust. After graduating high school with honors, he earned an HonBSc in Zoology and a PhD in Ecology at the University of Toronto. In the course of his graduate research on the ecology of birds in urban woodlots, he was awarded Ontario Graduate and Canadian Wildlife Scholarships. Interested in the effects of observer bias on empirical data, scientific conclusions and environmental management decisions, he has written or co-authored three books and nine journal articles on topics ranging from urban ecology, songbird habitat selection, reliability analyses of statistical inferences, and environmental management. He currently directs the Gotfryd Group of landscape architects and environmental scientists in North York.

Calling himself a "late starter in Judaism," Dr. Gotfryd, with his wife and children, is active in the Habad community of Toronto. Believing that an awareness of the Creator should permeate all of one's activities, he doubles as a troubadour, singing Jewish "soul music" at schools, hospitals, and other places.

"On Acknowledging the Creator in Scientific Literature" by Dr. Gotfryd appeared in BHT 6E.

Born in Nashville, Tennessee, Yitzchok Block holds a PhD in Philosophy from Harvard University. Professor Block is Professor Emeritus at the University of Western Ontario in London, Canada, where he taught in the Department of Philosophy for 36 years. Block’s professional areas of interest are Aristotle and Wittgenstein. Professor Block has published numerous papers and edited a book, Perspectives on the Philosophy of Wittgenstein. oHis article “G-d and Rationality” appeared in B’Or Ha’Torah 2; and “God and Rationality Revisited,” in B’Or Ha’Torah 6E. A revision of “God and Rationality” appears in Science in the Light of the Torah published by Jason Aronson.