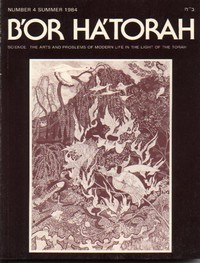 Sister, Companion, Dove, Perfect One: A Commentary on the Song of Songs

A Seminar on Effective Jewish Parenting

Mesirus Nefesh Mamash, A True Account of the Spiritual Commitment of Chabad Women during the Soviet Regime

Born and raised in the USA, Rabbi Yitzchak Ginsburgh received an MA in mathematics from the Belfer Graduate School of Science in New York City in 1965.

After making aliya to Israel and studying for several years in yeshivot in Jerusalem, he married and moved to Kfar Habad, where he lives with his family.

Rabbi Ginsburgh is Rosh Yeshiva of Od Yosef Hai, near Joseph's tomb in Shkhem. He also teaches Hasidism in Israel and the diaspora and is the Rosh Kollel of Kollel Menuha Rahel in Hebron.

Rabbi Ginsburgh's teachings on Hasidism are published in English and Hebrew by Gal Einai in Jerusalem. His system is based on the interrelation and flow among the five fundamental Torah-oriented topics of art and music, mathematics/natural sciences, psychology of mind ("light shining to oneself" — the service of meditation), psychology of heart ("light shining to others" — the rectification of character), and sociology/government.

Susan Schneider is the writer and director of A Still Small Voice, a correspondence school that provides weekly teachings in classic Jewish wisdom to subscribers around the world. She also teaches individuals or small groups wanting to work with text in depth.

Holding a BA in molecular, cellular, and developmental biology from the University of Colorado, Susan Schneider has also studied in the advanced program of Neve Yerushalayim. Working as a biologist, she pioneered an on-site respiratory program at Celestial Seasonings herb tea company in Colorado.