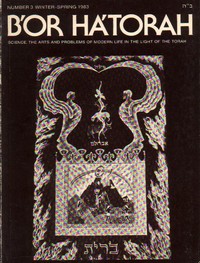 What We Cannot Know, The Limitations of Knowledge

A Statistician Looks at Neo-Darwinism

On a Scientist’s Comprehension of the Universe

Freedom and Creation, The Malbim’s Philosophy of Genesis

Professor Avraham M. Hasofer held the chair of mathematical statistics at the University of New South Wales in Sydney from 1969 until 1991, when he moved to Melbourne. There he was a professor of statistics at LaTrobe University until he retired a year ago.

In his more than 80 scientific papers Professor Hasofer’s main interest is the application of statistics to civil engineering. He is the co-inventor of the Hasofer-Lind Reliability Index, which is widely used in civil engineering design.

The founding president of the Association of Orthodox Jewish Scientists in Australia, Hasofer maintains a close connection with the Habad movement and lectures widely on Jewish subjects.

In B’Or Ha’Torah 3 Professor Hasofer published “A Statistician Looks at Neo-Darwinism.” In 8E he published “Codes in the Torah: A Rejoinder.” This rejoinder was followed by further discussion in issue 9E.